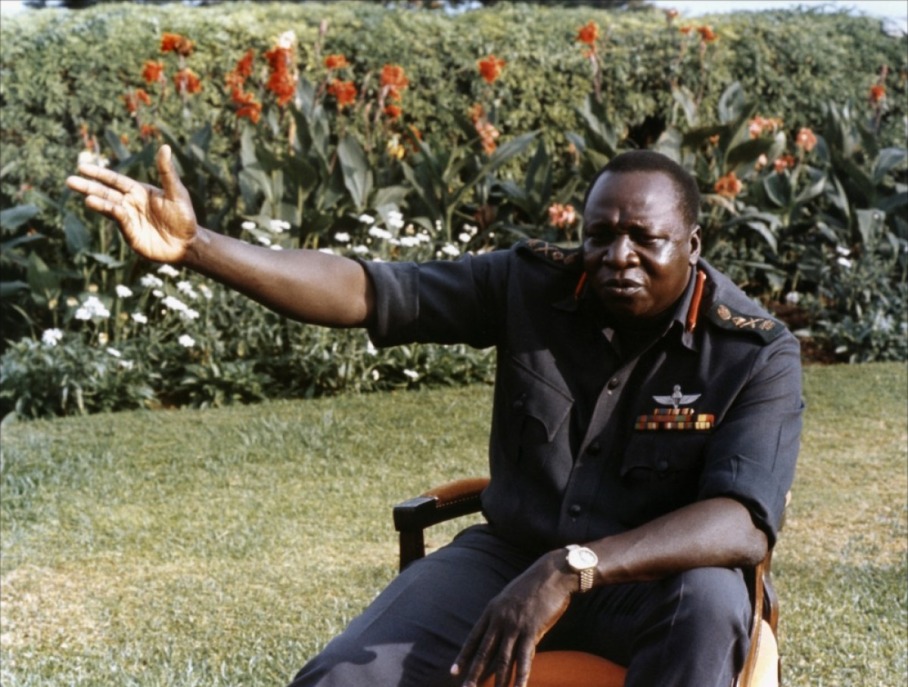 Obote’s actions on the 24th January 1971 set in motion the coup d’etat which was to bring Amin to power. On this evening, Obote, realising that he must contain Amin, called up the officer’s mess at Jinja barracks to order the General’s arrest. However, the switchboard was unmanned and, instead, the message was picked up by Sergeant-Major Mussa who subsequently seized the armoury to prevent the Acholi and Lang’o tribes access to the weapons they needed. Upon hearing this, Amin was forced to act and on the 25th January at 2am, open fire began to be heard in Kampala. Civilians were chased off the streets, government buildings were seized and the airport was closed. By breakfast, the coup had been successful and General Idi Amin Dada had assumed control. But how did Amin gain the popularity and support to achieve such a feat? In this essay I attempt to tackle this question by looking at certain threads of the same tapestry. To begin with I shall focus on the man himself, Amin, for without a powerful figurehead at its forefront, it is unlikely that there would have been any taste for or belief in a successful coup. Next I will look at the situation in Uganda during the run up to the coup as this highlights the development of an environment ripe for change. Finally, I will analyse Obote’s own actions in alienating the Buganda tribe and adding further resentment against himself and his government.

So; what of Amin himself? From the outset, he portrayed himself as one of the people. Although the President, he was willing to listen and talk to the people, and all his actions were aimed at helping them. “I am not completely communism and I am not capitalism…I am only leader who is alone completely and following only Uganda…we want just to be free…but we are not going to adopt anything but we only choose what is best for Uganda…” This quote is from the French Documentary ‘General Idi Amin Dada – Autoportrait’. Although one must take this documentary with a pinch of salt (it had Amin’s backing and will have been edited and portrayed in the way that Amin desired) it gives an insight into the man’s character and, by using material to back up what is portrayed, one can see how that gained him the support necessary to lead the 1971 coup d’etat.

The quote portrays Amin as a man of the people who is following a policy he believes to be the best for Uganda and all Ugandan people. In the same film Amin says “I lead my country on my best way how I want them to be lead according to my democracy, according to my knowledge and according to my thinking what is the best way of leading them and then I lead them according to that way…direct contact between me and the people, no middle man ”. These quotes clearly highlight a message being put across by Amin that he has the people’s interests at the forefront of all policies he undertakes.

Although the documentary was filmed after Amin came to power, this message was prominent during his rise to power as well. In Listowel’s book; ‘Amin’, she first meets General Amin in 1969 when collecting information on the situation in Uganda for the BBC. Although at the time Amin was still just Commander of the Army and Airforce, he clearly commanded respect whilst also fraternizing with the troops; Listowel states “He was surrounded by soldiers – other ranks – drinking beer. His tie was loosened, his tunic unbuttoned and a good deal of back slapping was going on…the soldiers were Obote’s men…there was General Amin drinking and making merry with his men; making friends in the President’s camp” . Further, Listowel provides evidence that, during Obote’s time in office, Amin defended the rights of the people. She refers to a meeting in the summer of 1970 between Obote and Amin where Amin vented his fury at Obote’s and Adoko’s dictatorship, the people’ poverty and loss of freedom, and the corruption and high living of Obote’s men . These examples show a man who, in the eyes of the people, had their best interests at heart and this helped him gain popularity amongst Ugandans even before he gained power in 1971. Amin himself realised the importance of having the people’s support; as he says in Auto portrait “And if they found that what you are saying it is not truth then they will never listen for you again and that you will lose confidence to the people but the people likes me very much and the reason why I am very popular because I always speak to them truth and if I don’t have anything to tell them I keep quiet” .

For a man to achieve success in an event such as a coup, he must not only be popular but also command respect and Amin not only portrayed himself as a General who had the people’s interests at heart but, importantly, he also highlighted his strength and power by spreading tales of his physical achievements. We see this in the film when he explains how he ran the 100 metres in 9.8 seconds and when he is shown winning a swimming race . Regardless of the fact that at the time of the film the world 100m record was 9.95 seconds and during the swimming race Amin is shown swimming across the paths of the other competitors, the message is clear; Amin was a man of physical superiority. Indeed, Amin was physically a big man; Listowel writes “He grew into a strong lad, six-foot four-inches tall, who was to outshine his contemporaries by his physical prowess and leadership qualities” but it was tales of his achievements that most helped him build this reputation of a physically superior general. Listowel recounts a story told to her about Amin concerning the regimental sports day in 1957. An Asian entertainer lay a huge concrete block on his chest and shouted “Who would like to come and break it with a hammer on my chest? I can promise no harm will befall me.” At this, the figure of Amin loomed up carrying a sledgehammer. Immediately the crowd went silent in apprehension as they knew Amin could do it. Amin brought the sledgehammer down on the concrete block, breaking it into several pieces. The Asian bruised, battered and badly-shaken, but alive staggered up, helped by Amin, who carried him off the field” .

Throughout his career, Amin recognised the importance of the image of power. Once President, it became a rule in Uganda that only he could hold the title of ‘President’, as one senior doctor in the film Auto-portrait discovered to his cost when he mistakenly referred to ‘the President of the Uganda Medical Association ‘ whilst addressing Amin.

The final element of Amin I will focus on is that of his military background. His position in the military was essential to his ability to seize power in 1971. Amin himself acknowledged when he was in power that he was a soldier at heart – “I am not a politician but a professional soldier. I am therefore a man of few words and I have been very brief throughout my professional career” . Amin was not an educated man; as he says in the film “I come from very poor family…my father has no money and I am to work, digging”. This is true. Amin did receive at least two years of primary education but, as Mutibwa says in his book ‘Uganda since Independence’, “Amin, at the very best, was semi-literate and…he lacked, as Grace Ibingira has commented, “the sound foundation upon which to build [on his education]” . However, he was successful as a military man. Mutibwa writes “he possessed, in abundant measure, the qualities that appealed to the British when recruiting…the officers were looking for a strong physique, stamina, speed of reaction and an upright bearing. Amin fitted the bill exactly” .

As British rule came to an end in Uganda, Amin found himself being promoted to positions a man of his background should never reach. The British were in a hurry to find officers to replace their own and they opted for traditional martial qualities rather than those of the educated. Thus, Amin found himself one of the first Ugandans to be given the Queen’s Commission as lieutenant . As he rose through the ranks, Amin began to command more and more power, even before being appointed as Obote’s Commander of the Army and Airforce. Not only did he gain power through this rise but also popularity. Mutibwa again writes “Amin is the embodiment of a man who has made it big from humble, peasant beginnings without having to submit himself to the frustration of a formal education’s elite aculturation progress” .

To adequately analyse the importance of Amin’s military background one must not overlook how his position protected him against sanctions which he might otherwise have suffered in regard to his behaviour. In 1964 Amin was sent by Obote to set up training camps for the rebels in the Congo whilst also being entrusted to bring out gold, ivory and coffee to pay for the arms and equipment provided to the rebels. However, in March 1965, Daudi Ocheng, Deputy Leader of the Opposition, produced evidence showing deposits in Amin’s bank accounts amounting to £17,000 in the month of February 1965 and in September of that year Ocheng proposed Amin should be temporarily suspended from his duties as Deputy Commander of the Army and his financial position officially investigated. However, requiring the support of Amin, Obote opposed the motion and so it was not passed. Obote again defended Amin when he was accused by Ocheng of having been associated with secret military training groups of youths in eastern Uganda . Martin backs this view up in his book ‘General Amin’. He highlights the role played by Obote in exonerating Amin from the corruption charges – “a question mark was left against Amin’s name but in the space of nineteen days Amin had gone from facing the possibility of suspension to being promoted to Army Chief of Staff” . This act was a signal from Obote that the matter had been settled and Amin was innocent. Had Amin not had such a high position in the army, it is likely that he would have fallen from his position under such corruption charges. As it was, he was able to reach an even higher level.